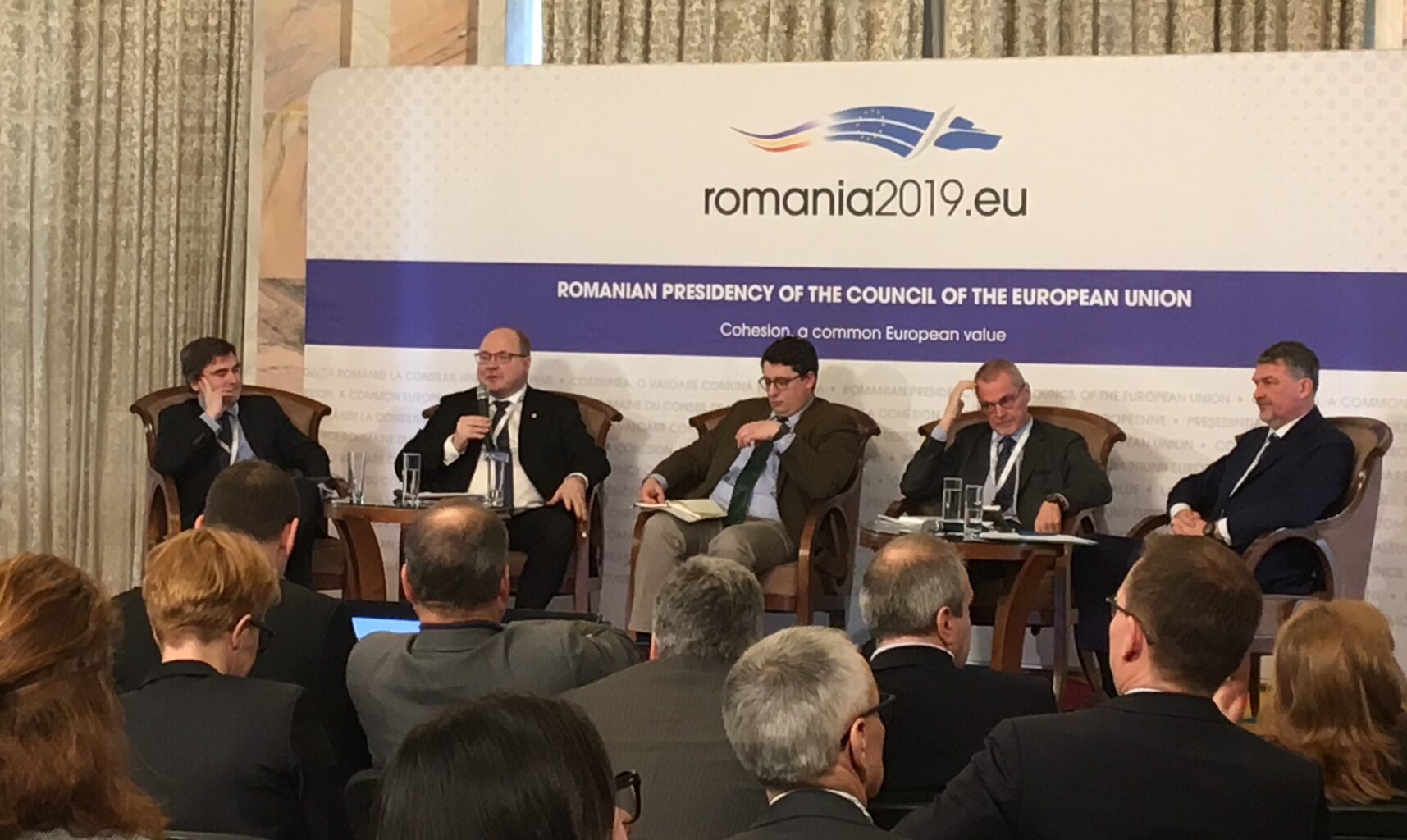 The speech was held by Director Matti Saarelainen in Bucharest 28th of February 2019.

“This morning I’m going to take my 10 minutes to talk about three things:
1) How states and institutions can response to Hybrid threats effectively (and Strategic Communication’s role in that)
2) Where EU and NATO can improve their response to Hybrid Threats
3) What the Hybrid CoE is doing to enable Member States and the institutions to build capability in this area

1. How: Given the theme of this conference I wanted to focus on the centrality of communication to effective Hybrid response. A few thoughts.

Separation anxiety- Strategic Communication suffers from a degree of separation anxiety- it is often treated as a separate field, with separate experts and communities. But at Hybrid CoE we see it as an intrinsic part of the response.

Effective resilience requires an open conversation with our population about unfolding Hybrid events (and our response to them) which maintains trust in our values, democratic processes and governance structures. Resilience also requires persuasive communications as we prepare our populations- campaigns which encourage them to change their behaviour and improve their own personal resilience are critical- whether we are asking them to put aside peanut butter or improve password security.

Separately, Effective deterrence of Hybrid threats requires States to demonstrate: resolve, coherence, capability, agility, willingness to attribute and desire to act in concert. To shape the adversary’s perception, we need to make sure our actions are effectively communicated- to achieve ultimate impact. Our strategic communicators are best placed to do this.

All this speaks to the importance of strong- connective tissue between strategic communicators, policy makers and the intelligence community. They should not be an afterthought in the national or institutional crisis response structures. They should be at the policy making table, thinking not just about how to communicate the government or institution’s response but what that response should be. They also need to be in close contact with the intelligence community. Strategic communicators often have a detailed understanding of the open source debate surrounding a Hybrid event ( and access to the tools required to analyse it). Given the challenge of information sharing within and between governments open source material can and should be the bedrock of our resilience and deterrence strategy. A strong relationship between these two communities will ensure it is effectively leveraged.

2. Where: Mr. Chairman, you asked me to focus on where I think the EU and NATO response was strong and where there was room for improvements.  Hybrid CoE has a unique perspective, being neither EU, nor NATO and given one of our core goals is acting as a neutral facilitator between the two. A couple of thoughts on each.

On strengths, I want to pause a moment on vulnerabilities and values. Often the values which are central to these institutions: respect for human rights, strong democratic institutions, the market economy, freedom of speech and media and rule of law are singled out as intrinsic vulnerabilities. And there is no doubt many of these have been exploited by our adversaries for their own ends. But they are also the values with which we won the Cold War. They are in fact our strength. They form the foundation of our resilience as institutions (and the resilience of the member states within them). It is both glib and true to say we need to be better about communicating them.

On a more practical level, EU and NATO have developed a strong set of commitments and actions on countering Hybrid Threats.  There is a good level of awareness of Hybrid and political will, at the most senior levels, to address it.  The key now is to implement these effectively and and communicate that implementation with impact. While initiatives are key, it is their implementation which will shift the dial.

And with that I turn to a discussion on where the collective response could be improved… At our inauguration Commissioner King encouraged the Centre to be challenging… So, in that spirit a few areas for the EU and NATO to consider.

Hybrid threats are full spectrum in nature. The use of multiple means in coordination and with malign intent to achieve a political ends requires a coordinated response. At Hybrid CoE, when we talk about deterrence our underlying principle is that we will most effectively deny the benefit or impose cost on our adversary if all aspects of government and society are coordinated in their response. The same is true at the institutional level. Between them, EU and NATO have the capabilities to detect and respond to a hybrid attack. They also have the tools to effectively impose cost and deny benefit to the adversary. There is still a need at a strategic level to have discussions between the two organisations about using these capabilities and tools in a coordinated and coherent way, as part of a campaign to protect the values that are central to the institutions. So strategic level discussions about a coordinated response is key.

This however requires a whole of institution response to Hybrid within each organisation. The bureaucratic vulnerability, as we call it at the Centre is the single biggest spoiler in any actor’s response to Hybrid threats. Siloes, blocks and poor information flow hampers response. On the EU side this means coherence between the Commission, EEAS, Council and Parliament and on the NATO side this is fusion across the civilian military divide. Both organisations are restructuring their approach to Hybrid internally, so we are keen to see the results. The logical extension of this is the creation of informal communities across the organisations (more on that later).

Agility is also key in cross institutional response and where there is always room for improvement at the national and institutional level. Particularly when it comes to crisis responses and political decision making. The PACE exercises have been key in exercising the organisations alongside each other. There is no substitute for exercising to test agility. Coherent and parallel exercising will remain important and the Hybrid CoE was pleased to support a joint NAC/PSC scenario-based discussion last autumn which tested this agility and provided an opportunity for a strategic discussion about a coordinated response. They will also support the exercises proposed as part of the Finnish EU Presidency.

3. What the Hybrid CoE does to support the institutions and Member States to improve response.

In the last nearly two years we have focused our work in four key areas which we believe to be key to improving the Euro-Atlantic region’s response to Hybrid threats.

Networks:  We have built practitioner networks across our 20 member states, EU and NATO and the private sector. These networks train, exercise and share best practice with one another, as well as coordinating action and testing policy response options. We have practitioner networks on: energy, drones, maritime security, technology and hybrid warfare, strategic communication, open source data, countering hostile states and legislative resilience. A networked response requires a networked solution.

Training: One of the Centre’s core goals is to improve the capability of its member states to counter Hybrid threats.  Training is an important way in which we do this. We have two flagship training events. One on using open source material to counter Hybrid threats. As I noted earlier, open source material is a critical enabler in building situational awareness and responding to Hybrid Threats. We train analysts and policy makers from across our Member States EU and NATO to analyse open source data and use it as part of their policy response to countering disinformation. We have run this course twice already and will run it on a further three occasions this year. This builds and supports our digital community of analysts across our 20 member states EU and NATO. We also train journalists to counter disinformation (with thanks to NATO support).

The second flagship training is on countering electoral interference. Elections, as I need not tell this community, are particularly susceptible to Hybrid attack. The two day event aims to bring together strategic communicators, intelligence and other government practitioners involved in securing elections- it and exercises them together. Facebook and Microsoft are our private sector partners.  This roadshow will take place in six capitals this year.

Exercising and scenario based discussions are mainstreamed in most of our activities because they are so critical to ensuring agility and testing the ability to coordinate. We have held two strategic multinational exercises on Hybrid Threats with participation of our member states, EU and NATO. We have also held numerous subject specific exercises on everything from de-synchronisation of energy supply networks, to countering electoral interference (and in support of the Romanian Presidency last week hosted an exercise on mass casualties – to support EU and NATO crisis response). In addition to running our own exercises we run them for institutions- the NAC/PSC scenario-based discussion is a case in point. We also support others with scenario development.

Trend Mapping and Intellectual Matchmaking: There are plenty of actors out there willing to admire the problem but at Hybrid CoE we are actively engaged in trying to counter it. Trend mapping has been key to this. We have a unique methodology for doing this which brings nominated academic experts from across our Member States (we call them our expert pools) together with practitioners working on that topic to map emerging trends in the Hybrid landscape. In Madrid last week we held a trend mapping exercise in this academic/practitioner format behind closed doors on Russia. We find this intellectual matchmaking the most effective way of ensuring cutting edge academic thinking makes it into the policy making bloodstream.

High Level Retreat: Finally, we host an annual EU/NATO high level retreat in Helsinki for senior leaders from both organisations. This outcome focused event gives staff from both organisations the chance to talk (beyond the confines of staff to staff cooperation) about emerging challenges and how the two institutions can develop a collective response.

It has been a pleasure to address you this morning. At the Centre we aim to lead the conversation on Countering Hybrid Threats. I look forward to hearing what follows.”

August 6, 2020 The Slovak Republic becomes Hybrid CoE’s 28th participating state This afternoon, Mr Peter Beňo, Deputy Head of Mission from the Embassy of the Slovak Re...

August 5, 2020 Job vacancy: HEAD OF INTERNATIONAL RELATIONS for a two-year term from September 2020 The European Centre of Excellence for Countering Hybrid Threats (Hybrid CoE) is looking...

July 10, 2020 China’s use of hybrid threats in its power politics China is seeking great power status and is significantly expanding its global influence...

June 26, 2020 One China under media heaven: How Beijing hones its skills in information operations Traditionally, China’s influence toolbox has contained a mixture of public diplomacy an...